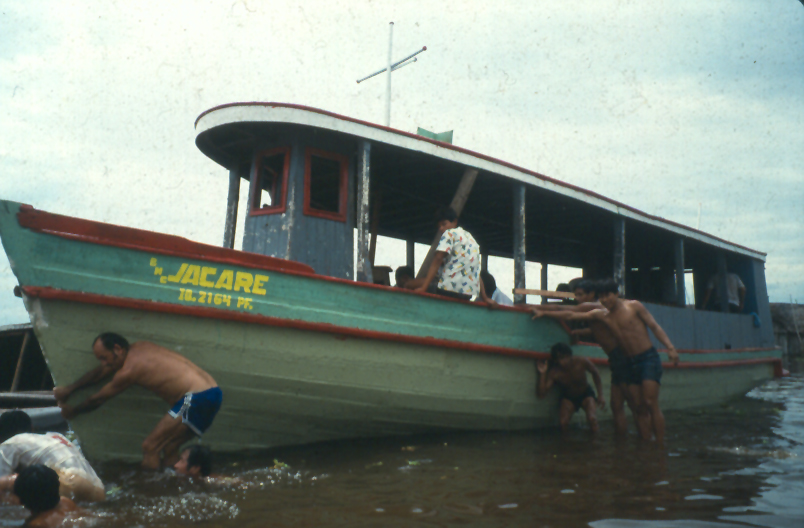 The Javari by Boat

Nearly 40 years ago I was given a book called Headhunters of the Amazon, written by a man named Up de Graff. It told the story of his time on the Javari River, the border between Brazil and Peru at the turn of the last century. It was a wild place in deep jungle, inhabited by isolated indigenous groups, fierce animals, and fiercer insects. Disease and death, mystery and misery lurked around every bend in the river.

The book was intended to keep me from exploring the Amazon. It didn’t. It gave me the perfect river to explore. I had to make four trips to the Amazon before I was able to get on the Javari, and what I saw on that fifth trip, in 1988, was a place as wild and uncontrolled at what Up de Graff described 90 years earlier. Once I had a taste, I wanted more.

I got more in 1992, when with some support from a botanical house, I rented and rebuilt a small river boat — just 39’ long — and with a small crew of 4 took off from Iquitos, Peru, down the Amazon to Leticia, Colombia. That first leg of the journey took 5 days in my small boat, and included a visit to a large leper colony, several visits to small military outposts, and run-ins with some unsavory characters. And that was the civilized part of the trip.

From Leticia, I turned my boat due south into the Javari and spent 12 days going up that river while collecting medicinal plants from the several indigenous groups that lived there.

All told, the trip took 29 days. It was successful enough that the botanical house had me do it again several months later, this time with more backing, and the presence of a botanist.

My second boat was a stout 51’ long. It too was successful, but unfortunately, the botanical house fell on hard times. Without their support I could not come up with the cost of additional trips. Rebuilding boats is expensive. As are hiring crew, fuel, food, gear, and all the rest that goes into outfitting a trip where there are few places to reup supplies.

Fast forward 25 years. I want to do that trip again. I want to record the changes that have occurred on the Javari in that time, take comparative photos, and return to those villages (which will have moved but in all likelihood be in the same area) to learn if the healers I collected medicinal plants from are still alive, and if they are not, whether their children are carrying on their tradition.

This trip will be expensive as well. I will have a crew of seven, including a filmmaker, someone to man the motor, a partner to help captain the boat when I tire, a cook, a local who speaks the dialect of several of the indigenous groups who live there, and one or two general assistants.

But if you’ve already given to a food bank and want to be part of something extraordinary — without actually being on the trip, then this might be of interest.

I damned sure hope so, because I am raring to go!